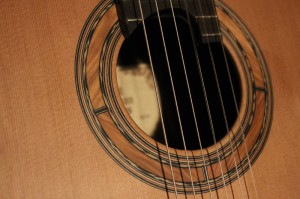 The guitar, its makers and its players have sojourned for over 500 years, always changing and growing to bring the whole sphere of the guitar’s development to its current level of beauty. Because of this rich history, the ongoing development of the guitar should always hold in consideration what has already taken place, and use the best of what has been learned from the past to contribute to the continued maturing of the instrument.

Combining these advances from the past with contemporary knowledge and vision, I am able to lovingly produce instruments that are moving towards the sound ‘image” that is stored away in my musical imagination. I refuse to be a slave to either tradition or technology, but keep a broad perspective of the entire process so the ultimate musical goals can be attained for each of the instruments produced. This is why I can have a high regard for such a great maker as Antonio Torres, yet build using the lattice braced style that has become so popular.

I started building guitars in 1985 using the traditional fan braced design, yet after eight years of building I came to realise that the sound of the traditional guitar, as beautiful as it is, was always missing something that left me, personally, wanting more, even though my guitars were receiving flattering comments. It wasn’t until I built my first lattice braced guitar that I finally heard the sound that had been in my head for many years. In hindsight, I now know that the sound that I am currently producing, is simply not possible to obtain using the tried and true traditional processes. With the considerable extra time and effort it takes to painstakingly produce a lattice braced guitar, who would do it unless they were totally committed to their own sound image? The over riding guide for me is,quite simply, musicality. In other words, whatever makes the instrument more musical for the player, the audience and the maker should be pursued, even if this means one has to move away, to some degree or other, from what is commonly held as the traditional way. Looking at it another way, tradition is an ongoing process. Just ask Torres!